In the summer of 2014, rapper Meek Mill levelled the serious allegation of ghost writing at international hip hop sensation and light-box dancing enthusiast Aubrey ‘Drake’ Graham. What followed was a series of social media touch points, music uploads (coinciding with the launch of Apple Music) and a bizarre meme-filled powerpoint slideshow during OVO Fest that effectively reframed the narrative. This session explores Drake’s social media tactics, intentional and unintentional, and how his ability to embrace the criticism levelled against him and embed himself within digital popular culture allowed him to not only neutralize Meek Mill’s allegations but legitimize his claim as a ‘serious rapper.’ In essence, this session considers the ways social media tacticians must learn to embrace their (perceived) organizational deficiencies, embrace the mob mentality, and embrace the memes. 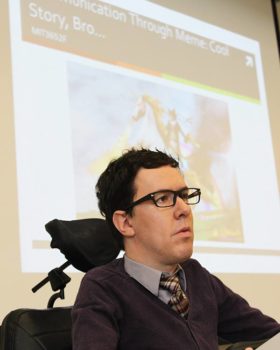