They see me rollin’… The story of Kraus D. Pron, Esq.

Some of you may have seen his charming face around social media lately.  Some of you may have even met him IRL (that’s ‘in real life’ for those who aren’t as cool as Kraus).  For those of you who haven’t had the pleasure, today is your lucky day!  This is the story of Kraus D. Pron, Esq.

Kraus: To know him, is to love him 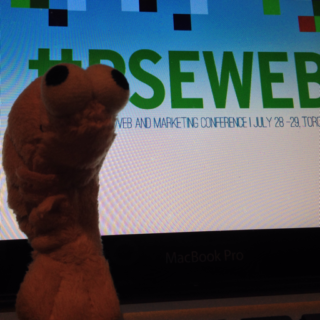 One fateful night several #PSEWEB conferences ago, a group of #PSEWEB’ers went out for dinner together.  After ordering their meals, somehow a prawn from the table made it into one of the #PSEWEB’ers pockets (a death-defying escape if there ever was one)!

After such a show, it couldn’t be helped: A night of shrimpish shenanigans commenced and new-found cross-species friendships flourished. “Kraus,” became a lifetime member of the #PSEWEB community, and its unofficial mascot. (Don’t tell him he’s a mascot though. Seriously, he makes bang bang shrimp look tame.)

When we last heard from Kraus…

After  surviving the infamous dinner, Kraus found new life at a nearby pub, safely protected in the cardigan pocket of a lovely fellow named Joel.  Kraus was given super-prawn powers after donning a lime helmet.
He found work as a PR freelancer, and shortly launched a Twitter account, befriending prawn-loving tweeters around the globe.  Kraus may or may not have gone a bit overboard with Twitter… He was kicked off  for being too engaging — over-enthusiastically reaching out to anyone related to prawns and many Canadian celebrities. (He was just trying to bond with his own kind.)

Thankfully, Kraus was supported by a loyal army of #PSEWEB’ers. He was able to navigate the Twitter appeal process and was back online in just a few minutes. It was close — the earth stood still at that moment. Perish the thought of a Kraus-less Twitter.After nearly calling in a missing-person, we thought we lost him in the wee morning hours but he popped up the next day.  Kraus appeared, always a fan of the breakfast of champions, armed with a spicy Caesar and an attitude to go with it. Being a man of mystery, Kraus went underground briefly, but then appeared in Newfoundland, fresh from the spa and ready to take on the interwebs.

Want to learn more about Kraus?

Now, now, calm yourself. We know it’s hard not to scream with sheer delight in his presence.  To keep up to date with Kraus, you can follow him on Twitter @KrausDPrawn.

Things to do and eat in Saskatoon

The Countdown to #PSEWEB Is On!